As I ambled out the front gate of Lima’s Jorge Chávez International Airport and picked out the cab driver with the nicest looking face it suddenly struck me that I was, after all, in Peru. End of semester parties, endless goodbyes to fellow exchange students on their way back to Europe or Mexico and a little holiday on San Andres Island had taken up most of my thoughts in the preceding weeks. Meanwhile, what little space that was left was full of an escalating excitement at the fact that I would be seeing my little sisters for the first time in a year. After a year of grainy Skype images and emails, I would actually be able to see them in high definition 3D, hear them in surround sound and best of all, give them both a massive hug.

Quito, Ecuador during a 24 hour stopover. 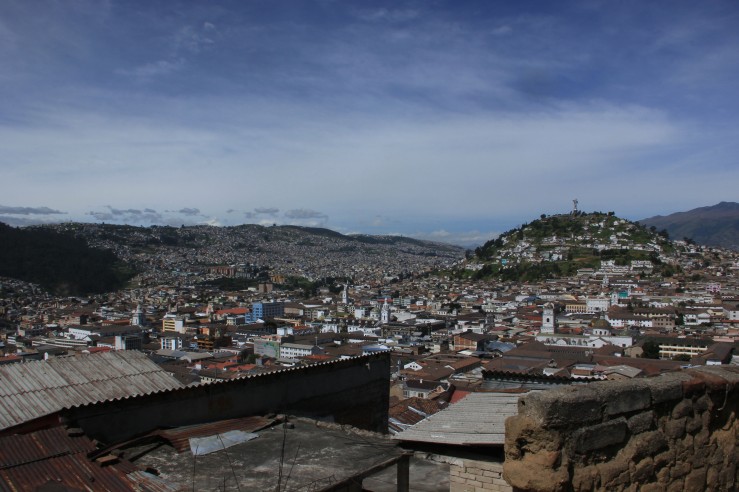 Sergeant Sexy of the Ecuadorian Armed Forces giving me the “put that camera away, gringo” eye.

Of course, their trans-Pacific flight had been cancelled and they’d be a day late, but what was 24 hours more when you’ve been waiting a year? Lima felt squashed under what I’m told is a permanent winter fog, the rain never quite starting or stopping but simply there, making no effort than that necessary to barely exist. I rented a board at Playa Waikiki – named after the Hawaiian original in a pathetic attempt to liken it to this grey, stony, polluted scrap of highway shoulder – and scored a few decent waves in what is by far the most polluted water I’ve ever been in. It went a long way to explaining the circus freak qualities of some of the local surfers I was sharing waves with.

My sisters – let’s call them Izzy and Ari – finally got in the next evening and, with only two weeks in Peru and already a day behind, we only had a day in Lima before jumping on a night bus up and over the Andes to the onetime Incan capital of Cusco. Buses in Peru can be anything from surprisingly luxurious to your standard Latin American battery hen farm on wheels. I was told by many travellers who’d been to Peru in previous years that Oltursa was the big secret of Peruvian bus travel – all the comfort of Cruz del Sur at half the price, they said. Well, the secret is well and truly out on Oltursa, with prices only just cheaper than it’s more famous rival. We found Tepsa a good option: meals, reclining seats, ample leg room, and just over half the price of Oltursa and Cruz del Sur. Cusco was nice, but we were admittedly in a bit of a rush to get to Machu Picchu, and only stayed long enough to hang around in it’s main square, the Plaza de Armas, and do a little exploring on it’s cobblestone streets crawling with hawkers, tourists and, every now and then, the odd Cusceño going about their business.

There’s plenty of different ways to get to Machu Picchu, and everyone will tell you theirs is the best, the fastest and the cheapest. We took the train, like rich tourist scum that we are. It was beautiful and expensive.

I can’t even remember how much it cost, that’s how much of a disgusting rich tourist I am.

It felt like we’d been travelling days and days from Colombia and Australia just to see Machu Picchu. Feeling bad about our train splurge the previous day, we opted to hike up from entirely-for-tourists Machu Picchu town, arriving just as the sun climbed over the Andes, sending a beam of sunshine onto the famous Huayna Picchu, the mountain above the (supposed) Lost City of the Incas. By now these kind of photos are a bit of a cliche, but it really is an astonishing sight.

Take a good look at that photo. Back in Lima a couple of weeks later, I overheard a man in a hostel saying that he didn’t like Machu Picchu. Why? “Because there were so many tourists.” This was said without the slightest hint of irony at the fact that, y’know, he himself is part of that lowest of forms of human life. There is plenty of literature out there about the scourges that are the bus tour and “dickhead” variety of traveller (the latter are usually Australian), written by simultaneously snobby and smelly backpackers who think that because they’re doing it on the cheap, they’re somehow better than everyone else. Fuck them. If travelling is a competition for you, go home. Now more of the tourist infested eyesore that is Machu Picchu:

Izzy and Ari – the ones who got all the good genes. 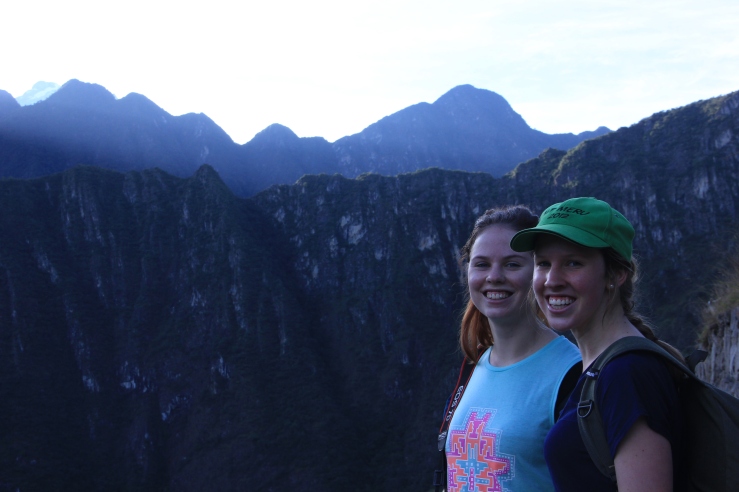 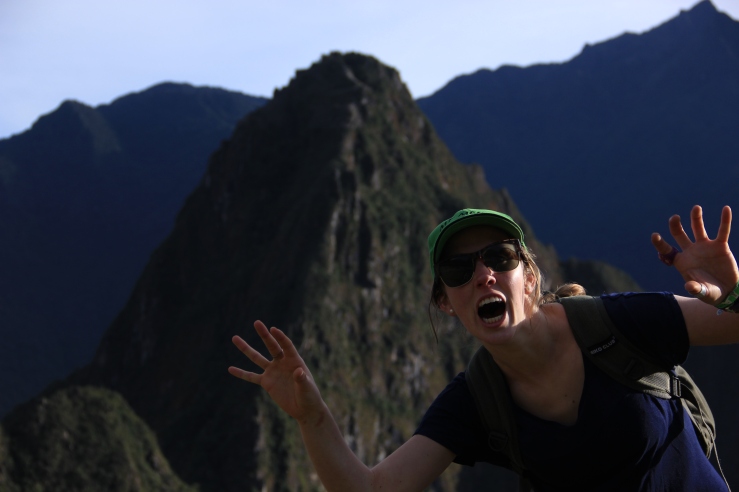 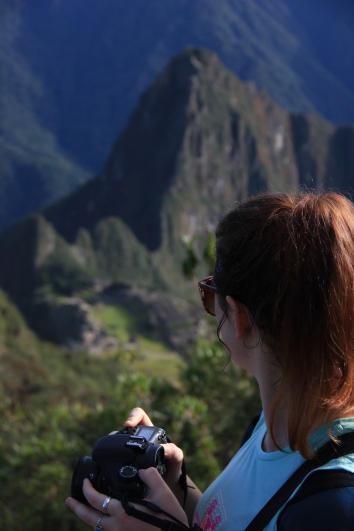 Climbing The Mountain over the city.

View from The Mountain

Aside from Huayna Picchu, what you don’t see in the postcards is that Machu Picchu is surrounded on practically all sides by a mind boggling sea of mountains, great swells of rock and ice frozen just as they’re about to break. Those buildings in the foreground were apparently the quarters for young, unmarried Incas.

In an early form of portraiture, the Incas experimented with carving rocks into the likeness of much bigger rocks.

The guide we hired to tell us about cool stuff I’ve pretty much all forgotten by now. He was great, though. 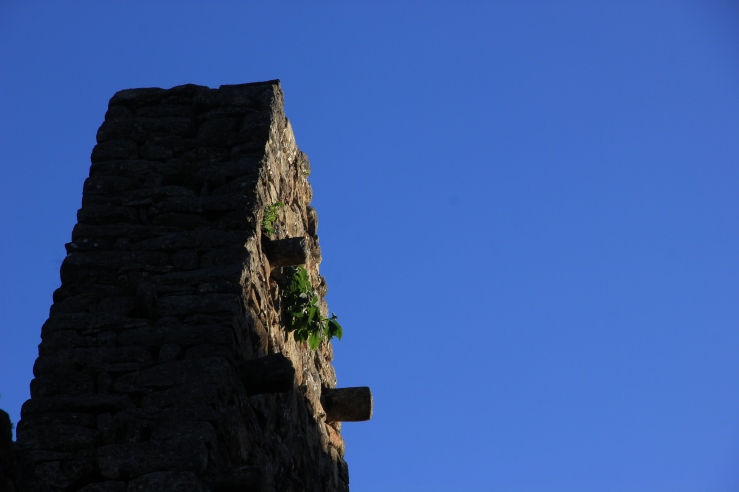 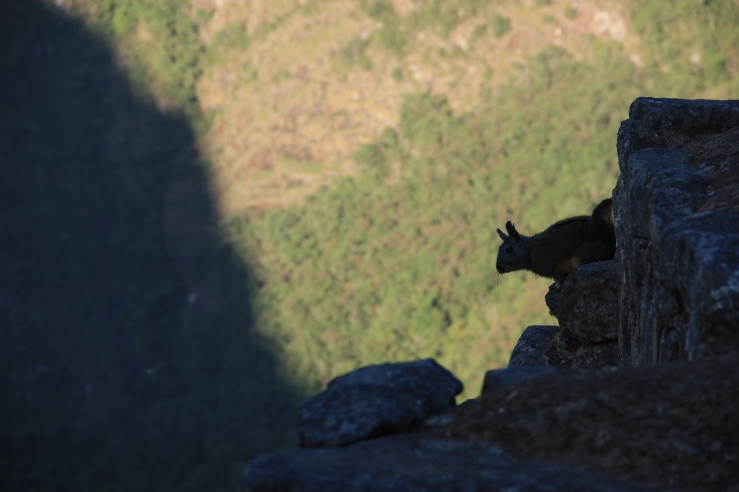 I became obsessed with the idea of waking up to this kind of view every morning. 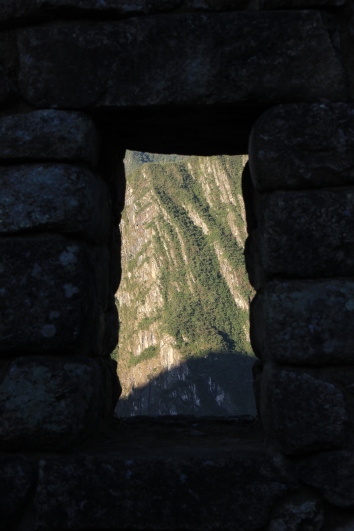 After all that, it was back to Cusco to hop on a plane and watch high desertscapes and snow-capped mountains suddenly fall away into lush green forest and finally, the endless carpet of the Amazon jungle, cut every now and then by the lazy brown snake of a river. Puerto Maldonado is a hot, treeless town closer to Bolivia than the rest of Peru, and we were keen to get out of there and into the shade of the jungle as quick as we could. Juan was our guide, and he took us to Laguna Sandoval, an oxbow lake of the kind that forms when a river gets bored and decides to change course. The still water makes it a haven for wildlife that included, as Juan like to remind us, the ‘Bushmaster’ – one of the only snakes in the world known to actually stalk humans.

Juan was a geeky kid from Cusco who you could tell just really enjoyed knowing all there was to know about nature. He told us a story about his uncle, who a few years back was canoeing down an isolated tributary river deep in the jungle on a research trip, when one of his group spotted a bunch of people on the riverbank. Upon being spotted, the people on the bank – clothed in the traditional not-much of many of the Amazon’s indigenous tribes – started shooting arrows at Juan’s uncle and his companions. They retreated, and then returned the next day to find a dead deer and a dead tapir at the same spot on the riverbank, both with their hearts cut out. It was a message, apparently, to not come that way again from one of the Amazon’s many uncontacted tribes. 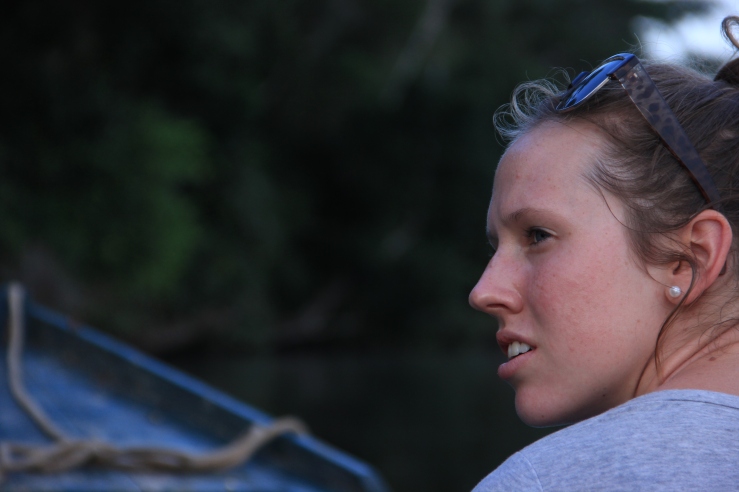 What lurks in the dark.

Early morning on the lake. 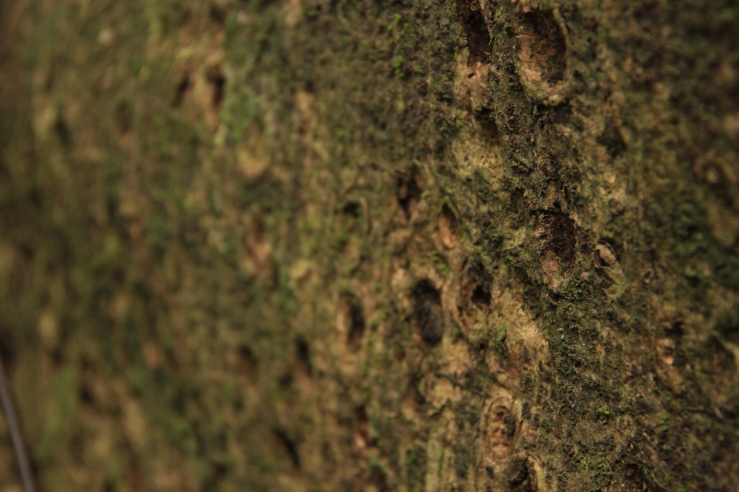 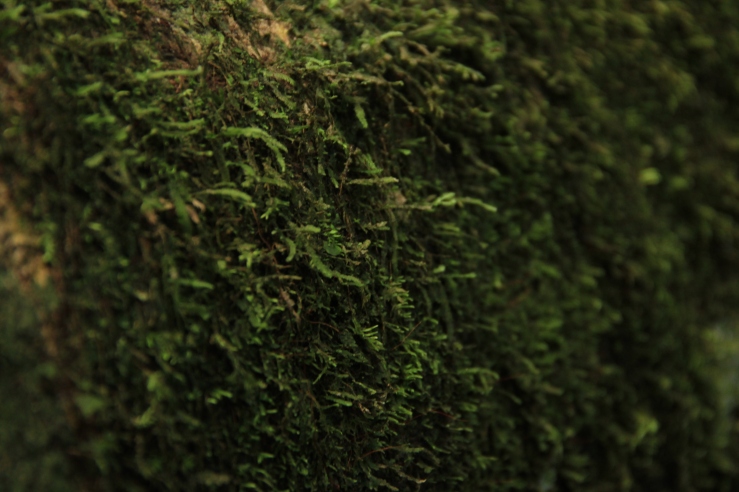 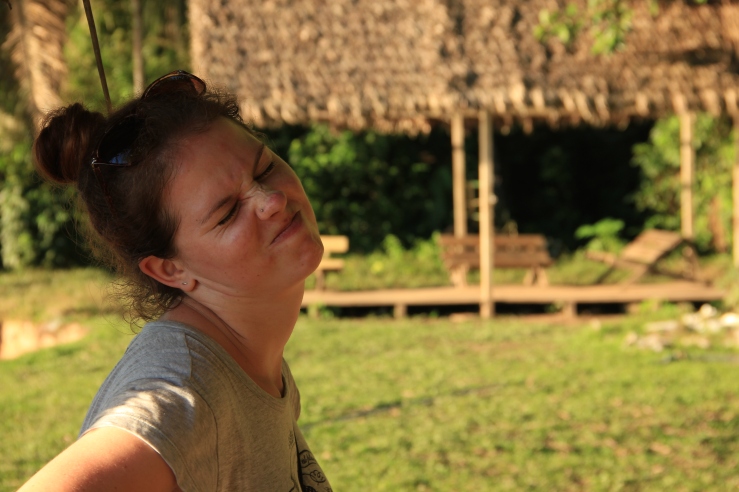 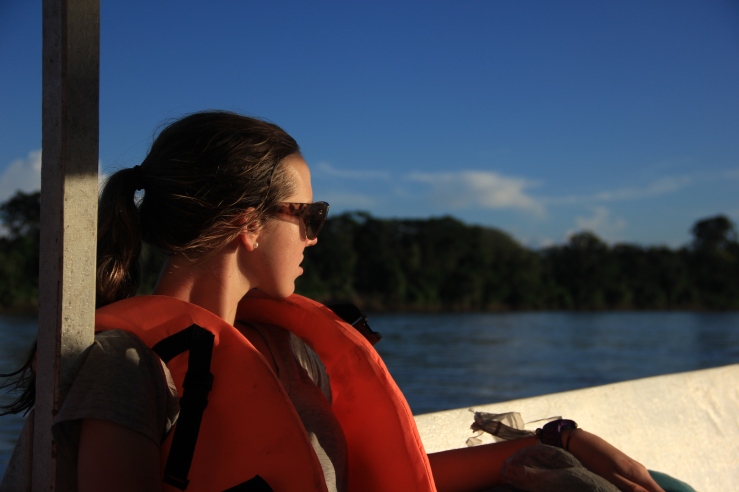 Highlights in the Peruvian Amazon included early morning macaws, canoeing past inquisitive squirrel monkeys, playing Tarzan on vine swings, scaring away piranhas before going for a swim and having a family of otters gawk at us like we were the wildlife and they were the tourists. Up next was flight and an overnight bus ride with the apparently suicidal (but cheap!) Flores company (their website comes recommended for the music alone). Apparently 20% of all bus crashes in Peru in 2007 involved Flores buses, a fact we only realised once we were strapped into the front seats on the upper level, with a panoramic view of our impending deaths. Nevertheless, we arrived bright and early to the old city of Arequipa, nestled in the shadow of Misti volcano.

Dawn from the roof of the hostel. 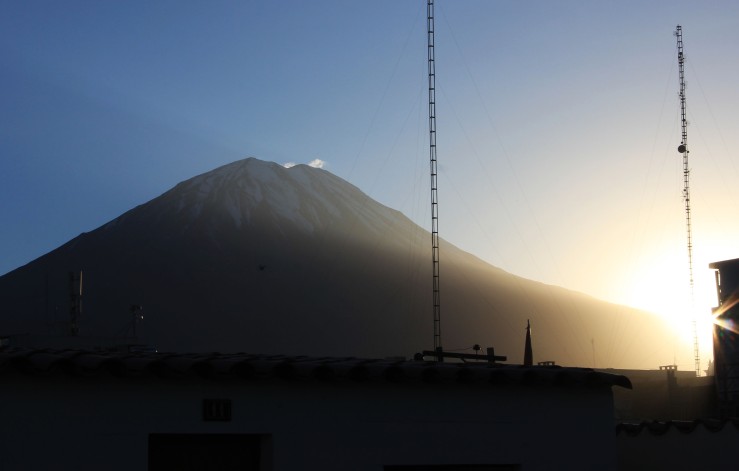 Throughout Peru you can tell that this was Spain’s most prized possession during the colonial period, and Arequipa is no exception. The streets were built with far more care and the buildings with more extravagance than their Colombian equivalents, which was by comparison an isolated backwater.

Protests in the main square. 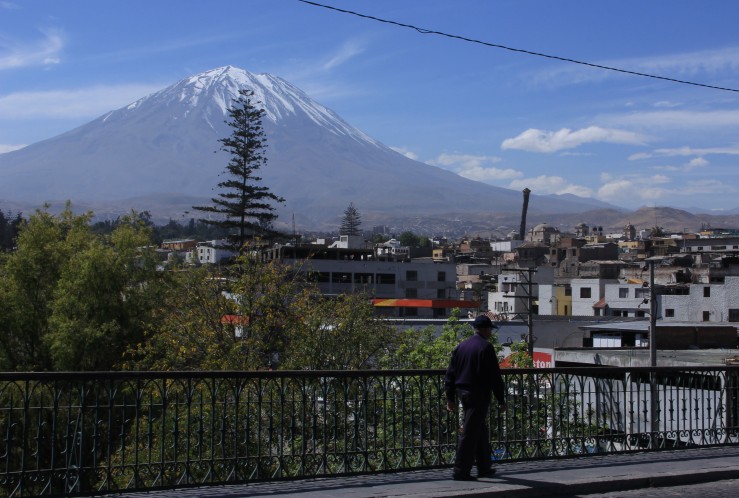 Archaeologists have found numerous remains of children mummified on the heights of this volcano, sacrificed by the Incas to appease gods who were making it erupt to express their displeasure. 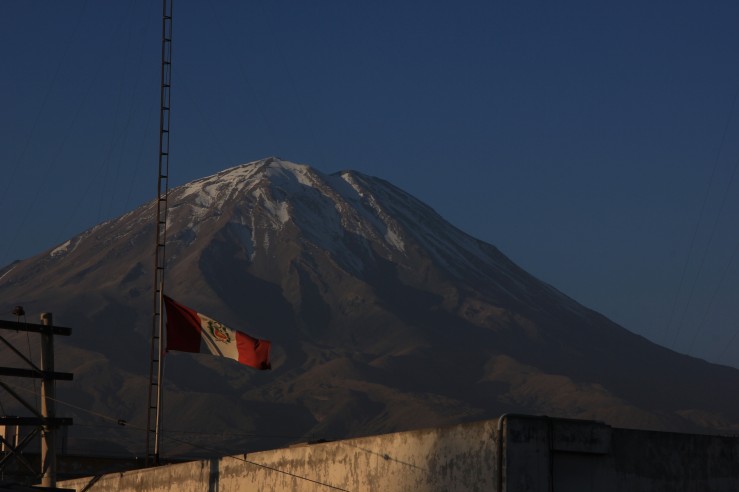 From Arequipa we took a bus across surreal high country, vast expanses of brown nothingness punctuated by snowy mountains, volcanoes, and herds of llamas and alpacas. After several hours of this we descended into the higher reaches of the Colca Canyon – the second deepest canyon in the world and twice as deep as the United States’ Grand Canyon. There’s something very special about sitting in the window seat of an ancient bus with no land visible from your vantage point except the very bottom of the canyon, some two kilometres below. Condors soar on the updrafts, stepping off their perches into the abyss and with nary a flap of the wings they’re off, like kites that swoop over the heads of cheering tourists.

See that patch between Izzy’s neck and Ari’s head?That’s an entire town. The smiles say it all. 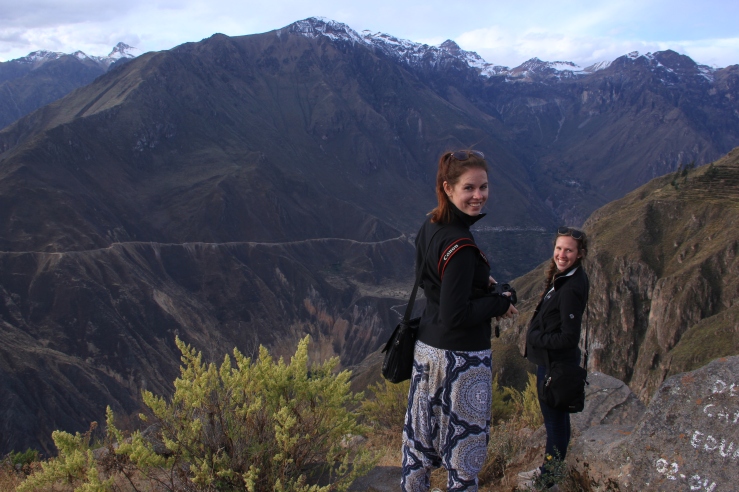 View from the hostel.

It was a four hour wait by the side of the road for the bus to come and take us back to Arequipa. It’s possible to hike down to the very bottom of the canyon, but with Izzy’s gammy knee and a shortage of time we opted to stick around at a lookout for several hours, arriving at dawn before the hundreds of daytrippers turned up and lingering long after they’d left.

Forced to stand on the bus back to Arequipa, 17-year-old Ari finally gave up and fainted as part of an elaborate ruse to steal a seat from a young Englishwoman too nice for her own good. Hah. We hung around Arequipa a few more days and then flew back to Lima, from where the girls jumped straight on a plane across the Pacific. Unable to convince the airlines that my ‘wife’ was in labor with our first child and therefore unable to get an earlier ticket, I was left to wander around Lima a few days. It didn’t turn out to be so bad, I suppose. 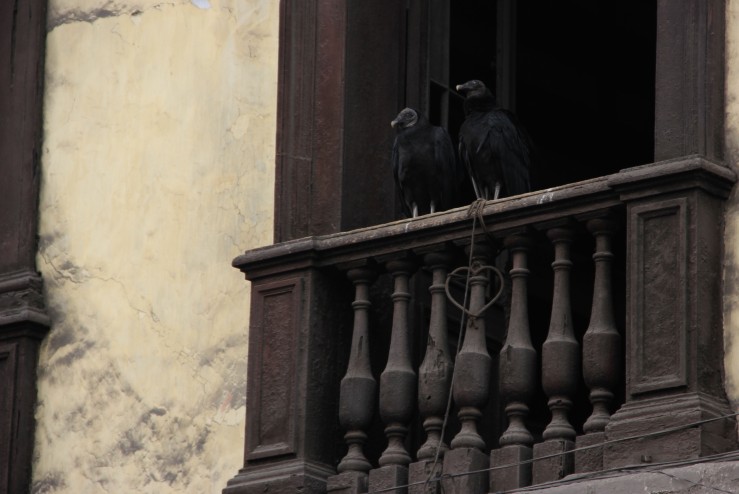 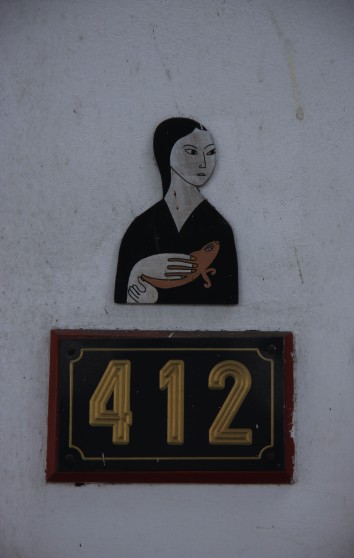 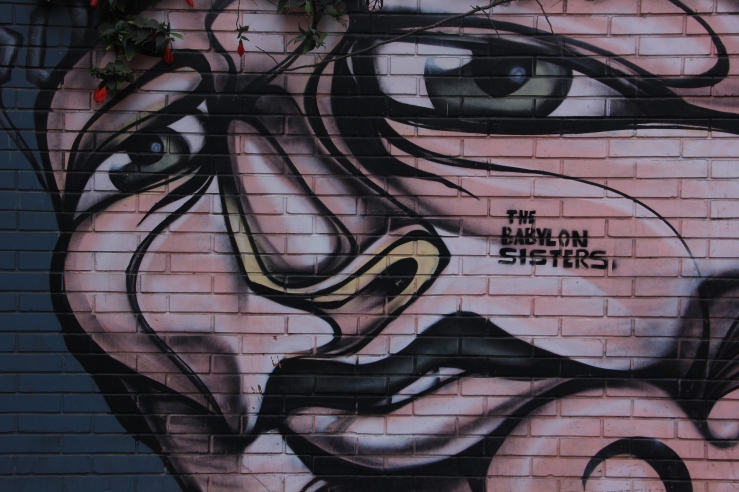 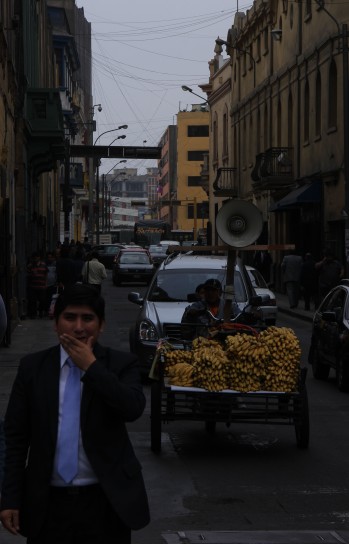 And with that I was off, back to Colombia for a melancholy week of packing and goodbyes, followed by a bizarre but very fun couple of weeks in the United States. That’s all coming soon, stay tuned.

4 thoughts on “The Dol Siblings go to Peru”