The road east into San Luis de la Paz, Guanajuato does not give a good first impression. Dust wreathes Highway 57 to the west as it rumbles towards Mexico City and tattered plastic adorns the cacti. A ditch by the road into town snags tumbleweeds as they bounce their way across the desert floor and it’s only the lucky ones who manage to roll across the top, picking their way through the traffic and breaking onto the flats on the other side. Clouds billow up from the jungles hidden behind eastern hills at the edge of central Mexico’s plateau.

On a scrappy road out of San Luis de la Paz there is a bike shop called Mision Bike, owned and operated by Luis Alvarez Rivera, a man whose wiry limbs and shy manner are a little at odds with his role as the patriarch of a large family. Every son, daughter (nine) grandchild (27 or 28) and great grandchild (three) in the Alvarez family form part of the Chichimecas, a veritable army of cyclists that competes, trains and feeds itself. Luis’ wife Irena takes residence in the kitchen of their stately house in town and makes sure that there is always some sort of feast available.

“I spend all day feeding cyclists,” she announces proudly over steaming tubs of beef in hot sauce, soup and piles and piles of tortillas. 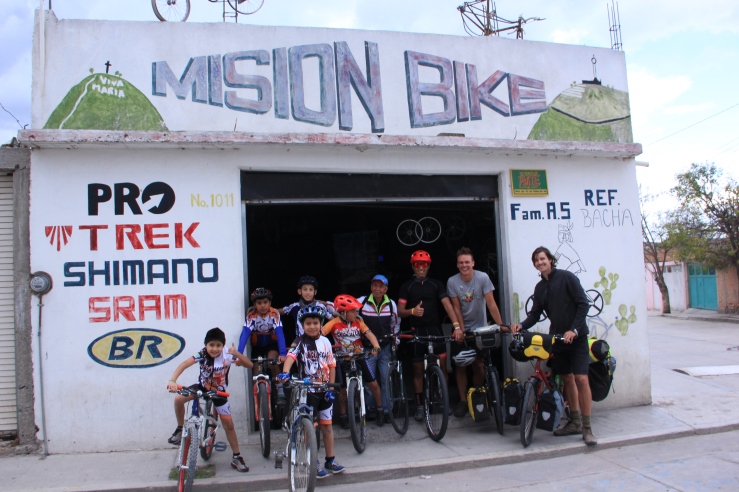 Luis was born in San Luis de la Paz and rode a bike for the first time in 1952, when he was nine years old.

“I think of cyclists as vagabonds, because that’s what I feel like on my bike,” he says. “I come and go, and often alone. When I was younger I used to be up at four in the morning to go train, and out on the roads around here you’d be completely alone. Maybe you’d pass a car or a truck every hour or so. I loved it. Whenever I had a bit of spare time, I’d be off on my bike.”

He has a photo of himself, taken in 1960 when he was 17. He was in Guanajuato’s state cycling squad at Mexico’s national olympics.

That’s him on the far left.

“Guanajuato was a powerful state for cycling at the time. We wen to Leon to train for four days, they selected a few of the best and from there we went to Mexico City. Cycling was almost the last sport in the games after basketball, baseball, all of that. There were two days left of the games. And then they said to me ‘You know what? You’re not going to race.'”

The powers that be had apparently found found a taller, older replacement and Luis was to stay outside.

“Well, I was crying and I returned here to San Luis de la Paz. I had a trainer who investigated the matter for me, and it turned out there’d been a bit of nepotism involved. I should’ve been the one to race.”

He stuck with the sport and represented Guanajuato for the next three years.

In 1966 Luis and Irena married and moved to Monterrey for work. He looks at the floor when he admits he barely touched a bike in his six years there.

“In 2008 I went to a race in Monterrey. It was a national race and I came third. And from there I started thinking, how much pendejo tiempo, why did I leave cycling just to work?”

He returned to San Luis de la Paz and eventually started up Mision Bike. He gets his competitive fix by acting as a mentor for the Chichimecas mountain bikers and dabbling in a bit of road racing every now and then.

There is a popular cyclist’s route through Mexico that starts in Tijuana and ends on the Guatemalan border in Chiapas, called the Ruta Chichimeca. The Chichimecas were a large, diverse collection of tribes who lived throughout north-eastern Mexico and parts of the United States. Despite his competitive streak Luis still sees cyclists as a romantic type of vagabond, and when he first heard about the Ruta Chichimeca in 2007 he made sure the next group of riders would find a place to stay in San Luis de la Paz.

“I had a bit of land outside town that belonged to my grandparents. They used to make pulque from the maguey trees here. It was pretty all over the shop by the time I got out here. Animals everywhere, tracks. It was a bit of a disaster, so we started cleaning up.”

The result of his labours is something of a cyclist’s ranch. Old rims decorate garden beds, there are bikes made of wood and frames hang from the walls in the bedrooms. He has a big communal kitchen and a complex of rooms and bathing facilities for guests. The idea is to make a living from the Ruta Chichimeca, but Luis will still offer a free bed and a meal to any independent cycle tourists who pass through his town.

“What you feel to be received in a house like this, we feel the same way to host people like yourselves,” he smiles.

Luis at his cyclist’s ranch.