Just thought I should give a little update on our movements, even though we’ve almost – but not quite – caught up with everyone in person here in Australia.

Our stopover in Los Angeles was a tight one, especially when airport security staff – that multicultural, friendlily stern farewell to America – discovered that I’d accidentally tried to bring a mallet in my carry-on, and we had to run to make our flight to Sydney. When we did make it, we must’ve been a noisy addition to the queue at our gate, panting and spluttering under heavy bags in the airless boarding tunnel. Moments later, a couple of blokes ambled in behind us, faces crinkled with the permanent cheek that you’ll find arranged along most country pubs in Australia.

“Get a little sunburnt on your holiday, did ya?” chuckled one to Hailee, who was red-faced from the run.

Hailee, bless her, responded with a request for a photo as we boarded the plane. At this, my cultural conditioning kicked in and I tried, unsubtly, to stop this. I hadn’t even left the United States, but surrounded by my countrymen I was already caught up in that oh-so-Australian need to not stand out, to not make a fuss.

“Don’t go getting embarrassed by your loud American girlfriend,” said Hailee as we took our seats.

So after a year of chuckling at Midwesterners in jean shorts, drive-through ATMs and obese SUVs, the tables had turned. I could no longer be the one to sit back and mock the pretensions and absurdities of a country that, deep down, I had come to love. It was my turn to introduce Hailee to my own quirky country and scattered family, to fill in backstories and explain our cultural oddities. A litter of babies had appeared in the family while I was away, and we still haven’t seen them all. 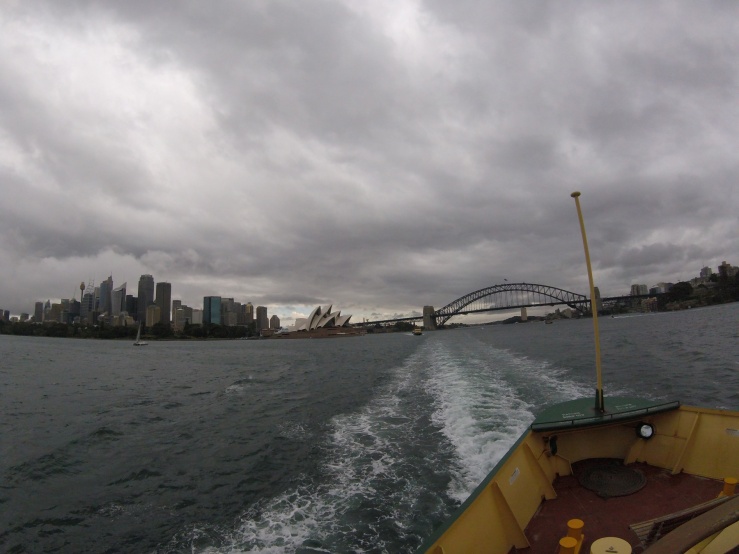 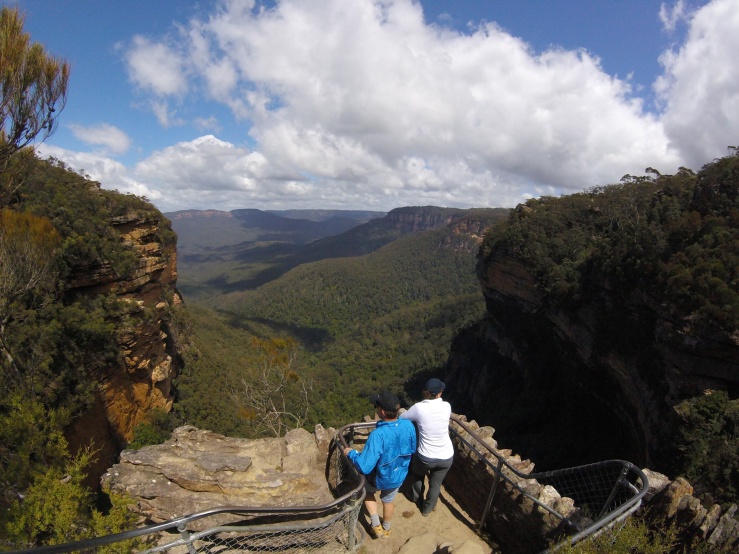 With dad in the Blue Mountains

The Hometown Strikes Back

We’d spent almost a week in Sydney’s brash metropolis before we headed northwest, accompanying mum to the town where she lives and where my sisters and I went to school. We were driving on the motorway between Sydney (the nation’s most populous city) and Newcastle (its seventh-largest city, just an hour’s drive away) through Ku-ring-gai Chase National Park when Hailee piped up, wide-eyed, from the backseat.

“I think I’m starting to understand what you mean by ‘empty,’” she said. The northern edges of Sydney were no more than 20 minutes behind us, and apart from cars on the motorway and a handful of boats and houses on the Hawkesbury, we hadn’t seen a single sign of human habitation. Just a freeway cutting through rolling hills, coated in untouched bushland.

Anyhoo, it took most of a day to show Hailee the sights around Armidale – the pubs, my old school, the university, the parks, the churches and the pedestrian mall downtown. In the U.S. I told people I was from a town that has only two sets of traffic lights, and while this is technically true, it’s also a bit misleading. Calling Armidale a “two traffic-light town” makes it sound like one of those dusty tumbleweed outposts where bachelors drive hours to find a bride who doesn’t appear on their family tree. But it’s actually a regional hub of 20,000 that positively bustles on a weekday – and it’s full of roundabouts. It’s big enough for my uncle and aunt (who once lived on a two million-acre cattle station) to grumble about life in the “big city.”

While in Armidale, Hailee and I found and bought a four-wheel-drive that will (hopefully) carry us around the country. Our relationship has progressed pretty quickly – we moved in together after mere five weeks in each other’s company – so buying an automobile and a home at the same time seemed fitting.

The machine itself is a ute that some enterprising carpenter fitted out with a set of wooden cupboards and shelves. Then, a man named Craig from nearby Inverell installed a second battery, a fridge, an inverter (we’re not entirely sure what that does), a rear view camera and a yurt-sized tent that folds out of the roof. We’ve been trying to come up with a fitting name for this truck of ours, but I fear we may have dithered too long and are finding it hard to settle. Past attempts have included Gertrude (“Dirty Gerty”), Baloo, Norman (“Stormin’ Norman”) and, currently, Archie. Any thoughts?

Everything about Archie has a satisfyingly utilitarian feel, from the specially-installed voltage readout (as if that means anything to me) to the grumble and roar it makes when started. There is a strap to keep the table secure (no crouching in the dirt like a cycle tourist these days) and as-yet unused notches for fishing rods. There are jerry cans for fuel and water and a solar panel, which means we can be self-sufficient for weeks in the bush, if need be. After a year filled with glowing screens and colourless conference rooms, the simple click and metallic slam of Archie’s doors opening and closing, or the way his seats bounce on bumpy roads all feel very tangible and earthy.

Archie is a touring rig customised by and for grey nomads, and he may not be sharing our enthusiasm about this circumnavigation that we’re planning. We blew out a bunch of fuses after we tried to attach a leaf blower to his second battery, for example. We make lots of noise when spiders crawl out of his innards. Once, we parked him in front of a beach house party featuring jungle tunes, op shop frocks and floral jackets.

In short, he’s left the company of a calm, competent old couple to be adopted by a pair of clueless hippies. Poor bugger.

Return of the Egg and Bacon Roll

Brisbane had changed little in two years – a couple more giants on the skyline, a few more upscale boutiques nudging the hippies out of West End – and there were plenty of familiar faces to catch up with. This included a rendezvous with the bacon and egg rolls at the West End Markets, popping in to my old workplace and a brief surfing and hiking adventure up on the Sunshine Coast (thanks Kelsey!).

All this wandering old haunts and reacquainting yourself with family and old friends is a recipe for some ridiculously indulgent introspection. Finding ghosts on familiar corners, or realizing you no longer fit in the space that was once yours, and all that. It makes me think of migrants who finally find a visa for a nation with greater opportunity or safety than their own, and find the door has locked behind them.

I have one such friend from Venezuela. Going home would negate his visa here, and when he does finally get that luxury, it will have been years and years since his last visit. For better or worse, he’s trapped. And he puts my own homecoming feelings right back in their place.

Attack of the Cyclists

Apparently I owed dad a bike trip, so after a stopover at his place near Sydney, and leaving Hailee to fly down to Melbourne, we drove up to chilly Jindabyne.

We only rode 350 kilometres or so over five days, but it felt like much farther. The Snowys, it seems, had heard my derisive snorts at the idea of an “Australian mountain range” and threw up false peak after false peak, some devilishly steep climbs and plenty of heat and flies to go with them. The Snowy Mountains are stark, especially at high altitudes where the skeletons of dead mountain ash trees claw at the air overhead. They’re also beautiful, full of wildlife and characters and make for a tough, satisfying bike trip. 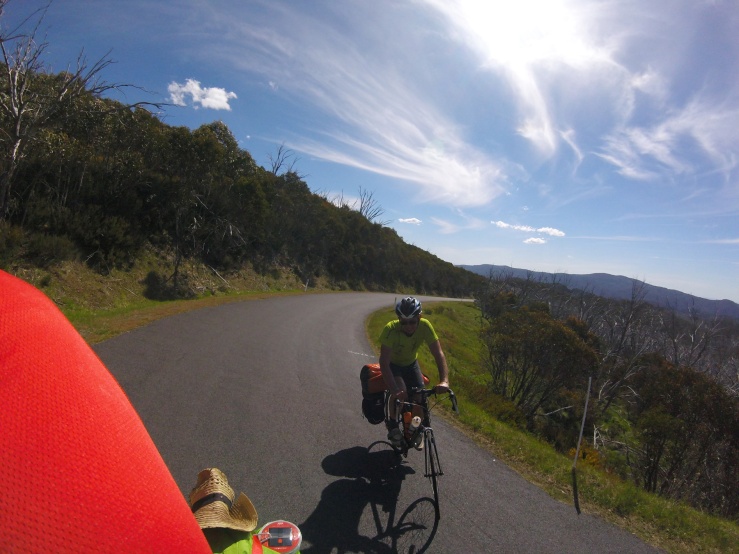 The photos never capture the steepness of the road, or so we tell ourselves. 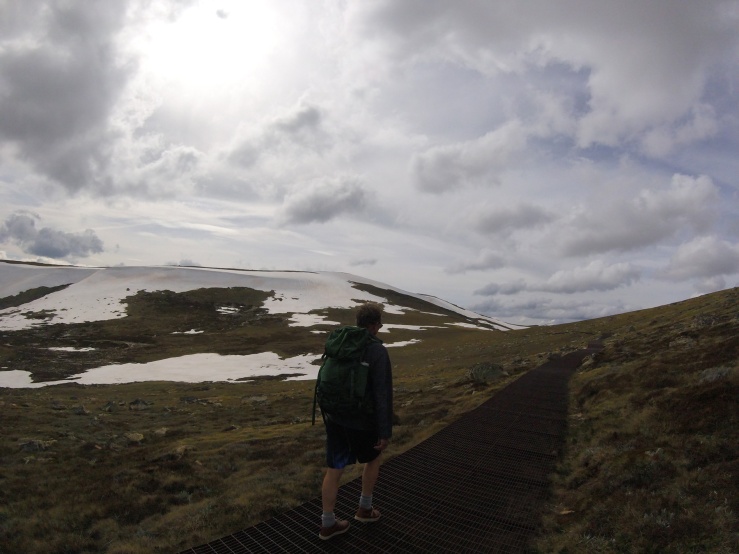 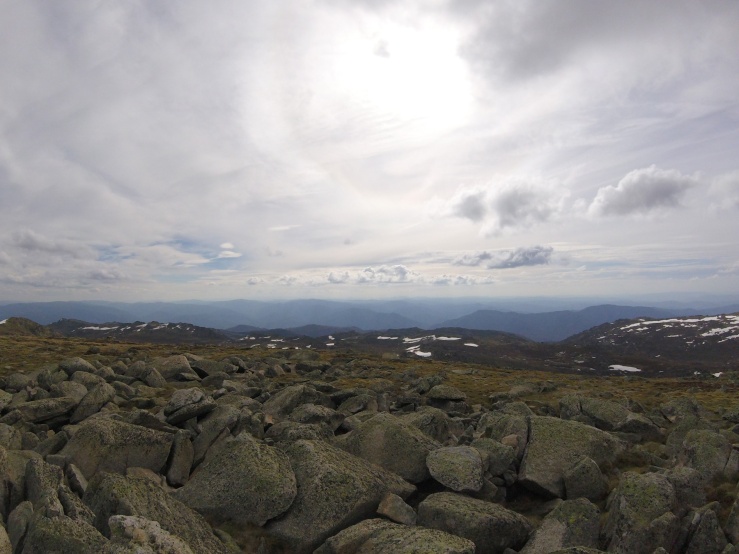 Then it was down to Melbourne, and between all the family catch up time and a record-setting Westworld binge session we managed to fit in a little trip down the Great Ocean Road. Those three days of driving merrily down any lane that took our fancy, picking our way around rock pools and through bushland, looking for animals and places to sleep and listening to Stephen Fry read Harry Potter felt like a taste of what is to come once we hit the road properly in March. We turned back towards the city at Port Campbell, and all the empty spaces, windy beaches and hidden river bends we’ll soon be exploring seemed to call as one to keep going west. 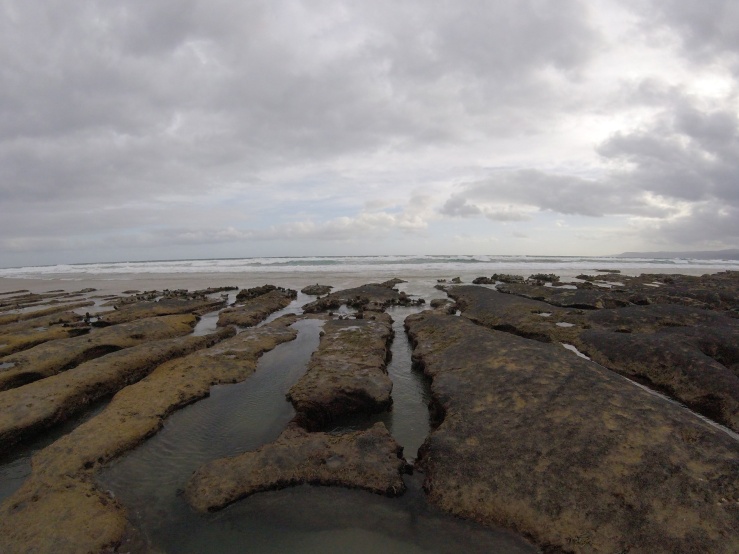 For now, though, we’re still on the family trail and happy to be here. Hope your own families are well and safe this Christmas. See you in the new year.

2 thoughts on “Back To Australia”