Alright, let’s get this out of the way. This time the excuse is this: as we neared the far reaches of Australia’s east coast and with it, re-entered the orbit of my family and the last weeks of the trip, I had less and less time to sit down and punch out a post. When I last wrote we were leaving the Top End and motoring south along the Stuart Highway, the Northern Territory’s bitumen spine, towards Alice Springs.

I want to start this post with a thought. Look around you and think about how high up and how deep down you might find living things. Soaring birds or the people in the top floor of your building might be the furthest living things from the ground, while an earthworm or tree root might be as deep down as biological beings can burrow. There might be a few metres of altitude between them, or a few hundred.

Now look at the ground beneath you, and realise that there is about 13,000 kilometres of earth between you and the life forms on the opposite edge. If the earth is a boulder floating in space, all living things are no more than a thin fuzz of mould or moss clinging to its face.

As I said before, this fuzz varies in thickness – you could measure it from the deepest roots to the highest canopy in a forest, or from the underground carparks and sewage networks to the highest penthouses of a city. In the ocean, the fuzz becomes a sort of soup stuffed with creatures and corals. As I walk around I like to look down on myself as you would on an ant exploring the tangled wilderness of a lawn. I can’t really explain why this is so satisfying.

As we left Kakadu National Park, we drove past a small bushfire dancing across a scrubby plain. Hundreds of kites, hawks and the odd wedge-tailed eagle circled above, racing one another for the rodents and small marsupials driven before the flames. Then we were back on the Stuart and driving south, and I watched the soupy swamps and high roofs of paperbark leaves and pandanus fans disappear. The earth’s fuzz grew thirsty and eschewed luxuries like flowers and broad leaves, drawing close to the soil, tightening up against the earth.

This change happened slowly. A new type of bush or slightly discoloured version of spinifex would appear from here and there, but from hour to hour there was no discernible change in the landscape. Still, after three days in the car the moss of wetlands and forests had morphed into a dry lichen of mulga scrub and spinifex scratching out a living amid dust and sandy riverbeds. 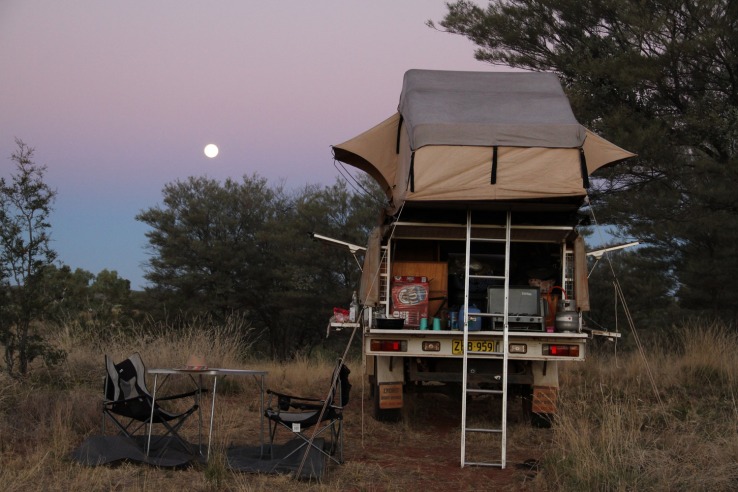 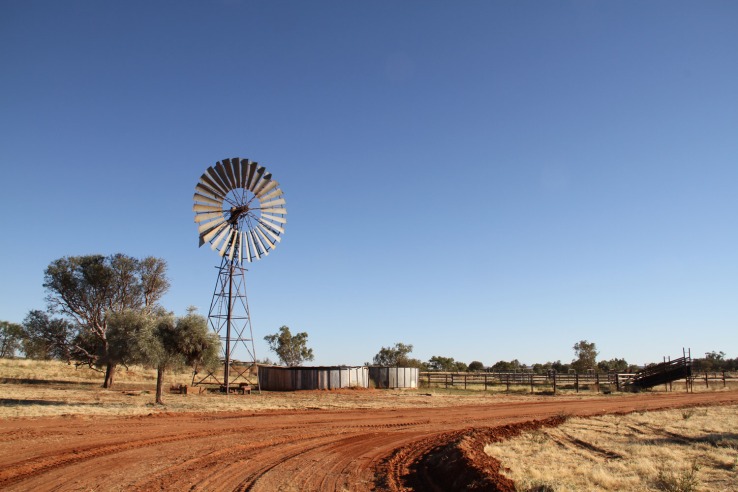 Alice Springs fits snugly into a notch in the MacDonnell Ranges, which run east-to-west and peter out in trackless desert several hundred kilometres either side of town. It’s a good place for the unofficial capital of the Red Centre (with 30,000 inhabitants), mainly because of the ranges. There is something reassuring about standing on the edge of town and having a sturdy red mountain watching over you.

Other towns on the Stuart Highway simply fade out into a flat, featureless expanse of scrub. If you stand at the edge of those places and peer at the mulga, it’s impossible not to think about how far it goes on like that – basically forever. Once you’ve failed (again) to comprehend the enormity of it all, you turn back to the town, which now feels like an island, more tenuous and vulnerable than ever. The psychological effect of living in such a place must go some way to explaining the shuttered, demoralised mood that pervades towns like Ti-Tree and Tennant Creek. Confronted as they are by baffling emptiness each day, it’s a wonder the good people of those communities can muster the will to get out of bed, let alone run a business or go to school.

Much better, then, to have a mountain or two to shut out such existential crises, and this has allowed the citizens of Alice Springs to focus instead on building an industrious hub of shopping centres, fast food chains, agricultural supply businesses, trendy cafes, galleries and even a golf course. Cattle stations as large as small European nations rely on its suppliers, forming an economy run by descendants of the town’s European founders and, increasingly, immigrants from almost every continent. Alice is surprisingly multicultural – when my Uncle Steve (who lives there) tells a story involving a blackfella in Alice, he might be talking about an Arrernte man or a bloke from South Sudan. There are young, educated newcomers from the coastal cities, too, having a crack at any one of the region’s galaxy of social problems. There is some tension in the town – the bluster and know-it-all idealism of the vegetarian newbies rubs against the shrewd practicality and “easy now” conservatism of the beef-eating agricultural types, many of whom are suspicious of anyone with hair below the collar or skin that doesn’t turn beetroot-red in the central Australian sun.

And then, of course, there is indigenous Alice Springs, a complex world of intermingling peoples and families, impenetrable and perplexing to most outsiders and all tourists. Like all towns in the Northern Territory, the indigenous population lives in a sort of parallel universe. In indigenous Alice Springs, a shoeless man who lives in a windowless government-owned house might command the same respect we’d give a white man with leather boots and a two-storey mc-mansion by the golf course. The shoeless man earns his place through familial ties and ceremony. His boot-wearing counterpart earns his place through good business sense.

I can’t pretend to understand or diagnose the issues but I think it’s important to point out that, from a historical perspective, indigenous people are pretty busy working slowly and painfully through a fairly sizeable wad of shit. They say the reverberations of a traumatic event can affect people seven generations down the line – that’s almost 200 years on. It’s only been 40 years since our illustrious forebears deigned to recognise indigenous Australians as legal citizens. We’re only a single generation beyond the Stolen Generations.

The racism that indigenous people still experience in Australia is characterised by a wilful ignorance of the traumas our community inflicts on theirs. When your car is taken for a joyride, then burned in the desert by indigenous kids, it’s easy to call them mooching good-for-nothings and say things like “that’s just the way they are.” (Hailee and I have heard them called much worse.) It’s much harder to see such an episode in the wider context of a damaged culture locked in a centuries-long struggle to sort its shit out, and to realise that a few cars (and people) will become casualties along the way. The best we can do is recognise that trauma, accept our responsibility and do our best to do no further harm.

As we rumbled Steve (the ute) out of Alice Springs, a song lodged itself in my head. I first heard it as I danced with Hailee and some friends in front of a stage in the Bay Area and although the crowd, the band and the song’s topic were all American, it resonated in the Territory too. The words are short and simple, the music infectious, and somehow it puts smiles and tears on my face every time.

Yes, I’m a sappy middle class bleeding heart – but that song makes me proud to be on Team Homo Sapiens.

In the West MacDonnell Ranges 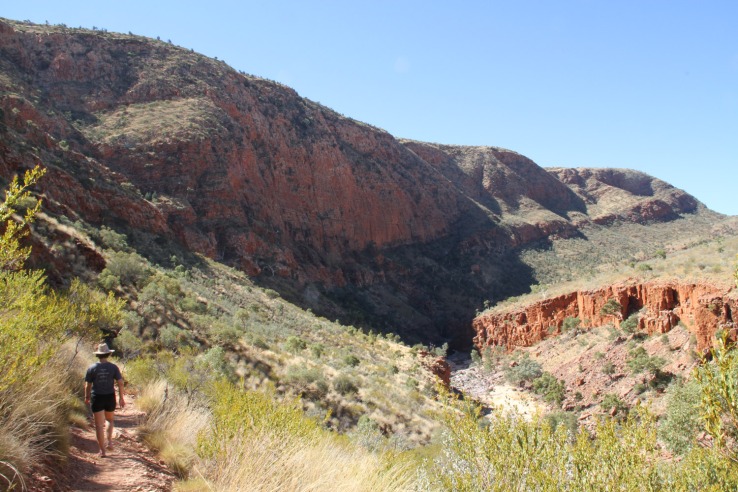 After dallying a while in the West MacDonnell Ranges, we made for the big red mythical rock. We probably found the most spectacular campsite of the trip here – on a sand dune overlooking Uluru to the south-west with the larger domes of Kata Tjuta peeking over the horizon. By day we joined throngs of sweaty Europeans and thong-wearing suburban families trudging around the sculpted bulges and chasms of the big red rocks, both fringed by mulga and the shaggy desert oak. By night we retired to our dune camp, and listened to dingoes howl.

At the dune camp.

There’s a Hailee in there somewhere.

Despite the sunset traffic jams, the Segway tours (yep) and the resort town of Yulara (which has all the charm of a Penrith strip mall), there is still something very strange and moving about this monolith in the desert. The sight of a shapely ribbed rock, like one of those sand worms from Dune, stirs something deep and primitive in every person who takes a moment to actually look at it: every drongo who stops admiring his Hilux for a second, every faux Gucci-sporting Chinese tourist who takes a moment’s rest from her photo shoot, and every bratty suburban kid who stops bickering with his younger sister for a minute. You can’t fail to be moved by Uluru, and then perplexed as to why. 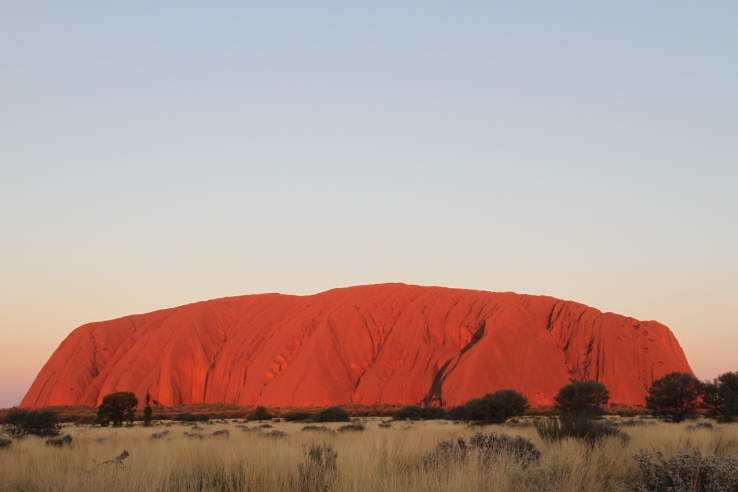 It’s just a rock, after all. I don’t know how to put it into words – the closest I can get is this: If scientists decided Uluru was a meteorite that bore a fuzz of bacteria which ultimately evolved into life as we know it today, I wouldn’t be at all surprised. In fact, I would probably move into one of the caves at its base, devote myself to rock worship, and badger tourists with pamphlets about my new religion.

2 thoughts on “The Red Centre”