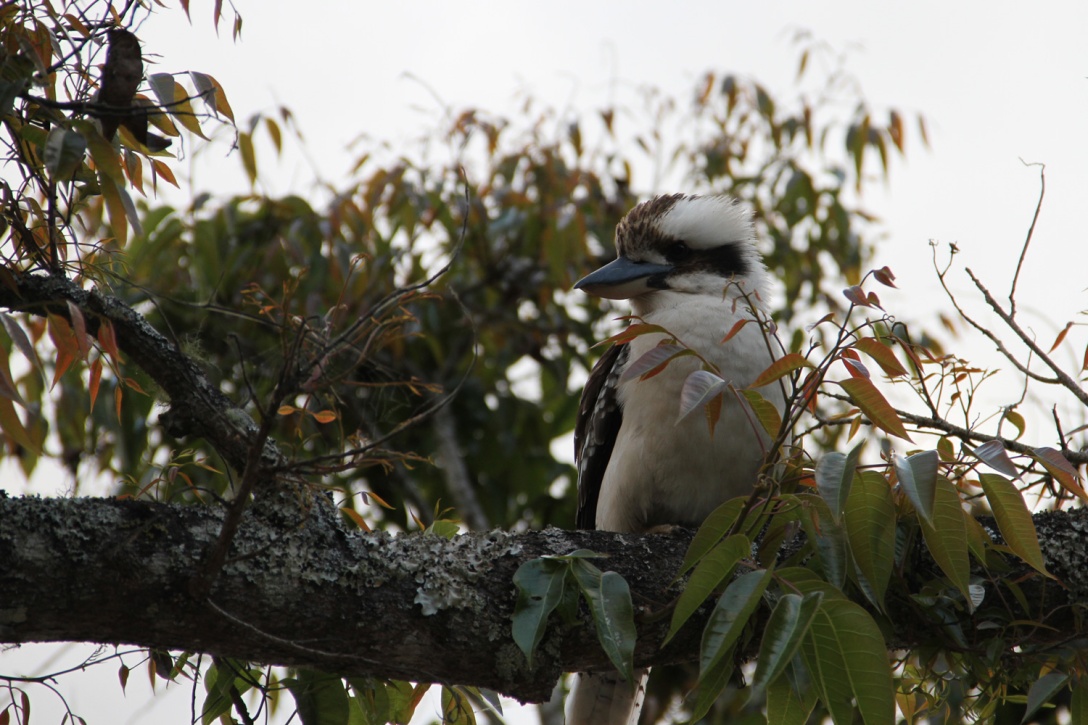 There are several routes into Queensland from the Northern Territory but only one of them, the Barkly Highway, is paved. I had my sights set on the Plenty Highway, which cuts east off the Stuart a little way north of Alice, and heading towards Channel Country beyond that. Hailee was more inclined to stick to the bitumen and make for Queensland’s tropical north. Steve was limping a little by now  and, financially speaking, we had very little margin for error. Reason – which so often comes in the form of Hailee’s voice – won the day.

This meant backtracking over 500 kilometres up the Stuart to the Three Ways Roadhouse. As we neared the Queensland border, little signs appeared to notify us every time we were 10 kilometres closer to this last state of the trip. Queensland and New South Wales had recently played each other in the State of Origin rugby series, and so under the “QLD 40” sign some wag had sticky-taped a bit of paper and written “NSW 0.”

Travelling around Australia with a foreigner has been extra fun for me because I get to play guide, even in places I’ve never been before. I’ve been her historical guide, her translator when someone’s slang is particularly thick and, as we come into some new zone, I take it upon myself to inform her of the stereotypes associated with that particular place.

So when she said “This is it, we’re leaving the last big outback state,” as we left the Northern Territory, I had some work to do.

Culturally speaking, Queensland has the same reputation as a state in the American south. It even grows some of the same crops – cotton and sugar are massive. For a time, these crops were even harvested by dark-skinned slaves, kidnapped from their South Pacific islands for a life of servitude. I told Hailee that we still had plenty of outback and exotic creatures ahead of us and, as we crossed the dry Georgina River into Camooweal, she understood what I meant.

The Sunshine State has its very own, very distinct style of architecture that makes itself felt as soon as you cross the line. Clapboard houses on stilts are ubiquitous (and serve the dual functions of cooling the house and raising it above floodwaters), as are low, steel fences. As we tacked east to Cloncurry, then north towards the Gulf, the gardeners of Queensland became less preoccupied with coaxing things out of the ground, and more concerned with hacking them back. Flowers, fronds and humungous leaves leaped out of the dark, wet earth, and threatened to overwhelm the mouldering houses.

We spent a spooky night by the Flinders River, and in the morning spotted freshwater crocs and a large black-headed python roaming nearby. We saw the mangrove-ringed Gulf of Carpentaria before shooting east again on the Gulf Developmental Road towards the populous east coast.

After months and months of massive skies, straight roads and pancake landscapes, things began to change very quickly once we hit the Kennedy Highway. Whole forests of proper trees appeared – and not just at the edges of waterholes and rivers, but all over the place! The road began rising and falling, steeper and steeper, until all of a sudden Steve was groaning up towards the waterfall town of Millaa Millaa on a one-lane road, plunging down into thickets of rainforest and then out onto ridges surrounded by putting green pastures.

There’s no visual anchor in such a landscape. The proper horizon is always lost down some valley, or behind a mountain, there are clouds above and below you at the same time, and the effect is sort of like swimming in a choppy sea with no land in sight. Every time you begin to grasp your bearings, everything morphs before your eyes and you’re lost again.

I usually enjoy exploring these places, however you must remember that this had all happened quite suddenly. Hailee and I retreated to the shores of Lake Tinaroo, in Danbulla National Park, and took a few days of stillness to comprehend our new surroundings. 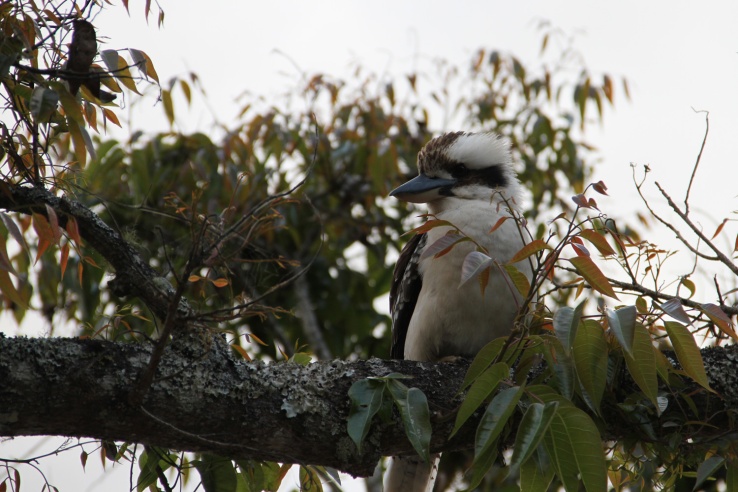 I made her stand there.

The Atherton Tablelands sit on top of and behind the Great Dividing Range, sheltering forests that have gone largely unchanged since the dinosaurs were around. The soil is deep, rich and regularly watered by tropical storms, but flat, workable sections are relatively few and far between. Any flat-ish piece of the tablelands has therefore been stripped away like a Brazilian wax job, revealing a softly undulating earth now covered in thick, luscious grass and happy dairy cows. The rainforest reasserts itself at the boundaries, biding its time, and you get the feeling that only constant vigilance will keep it at bay.

We motored north, parallel to the coast but sticking to the tablelands until we turned off the road to Cape York and aimed for Cooktown. The town gets its name from Captain James Cook, who spent seven weeks repairing his stricken ship Endeavour on the beach at the mouth of a river. We stopped for a look around at the rivermouth, mingling among the backpackers, the big Thursday Islanders and some Guugu Yimithirr women from nearby Hopevale, all fishing with reels and handlines. Steep hills watched over the water on the deserted northern bank, and I could feel our proximity to the islands of Papua New Guinea. Part of me wanted to keep driving north, leave the car at the tip of Cape York, find a ride on a boat to Port Moresby or Dili and keep travelling.

Instead, we turned south one last time. From here on, we would be motoring towards Armidale and Hailee’s flight to the States, still a month away. We rattled back into the rainforest, which seems mostly inhabited by hippies north of Cape Tribulation. This part of the country is known for its beaches and while they are beautiful, warnings of stray crocodiles and stingers keep just about everyone out of the water. I found the waterholes and waterfalls tucked into the folds of the mountains far more exciting. 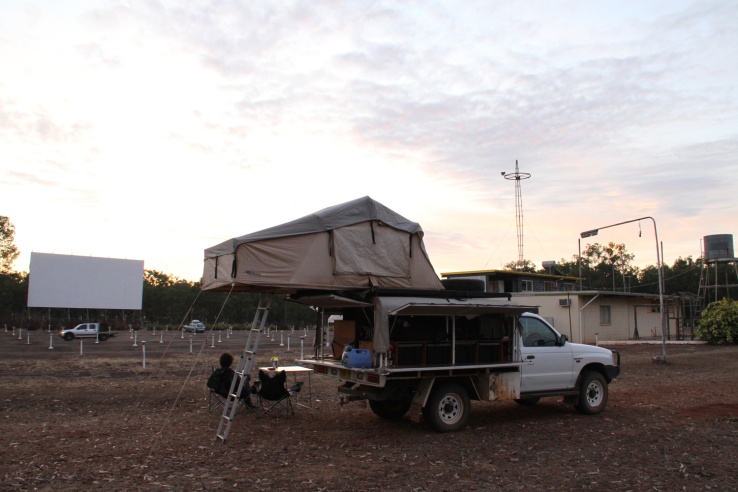 Camped at the Mareeba Drive In.

On an idle day in the hills north-west of Cairns, I parked myself in a camp chair do some work on my laptop. Meanwhile, Hailee decided to take on a nine kilometre walk through the rainforest. Several hundred metres down the track, she found a sign warning of a male cassowary who lived in the area and had been exhibiting “aggressive defensive behaviour.” The Parks service advised caution.

Cassowaries are the third-largest species of bird in the world, behind ostriches and emus. They sport jet-black body feathers, and their head and neck are bright blue with red fleshy bits dangling from the chest. They can run up to 50 kilometres per hour through the rainforest. They attack by kicking, and the long, dagger-like middle toe on each foot can make those attacks lethal. However, they very rarely attack humans and have a tendency to disappear long before you’d know they were there. We’d seen their distinctive bright purple droppings all over the place, but we’d yet to see one in the flesh.

When I hear Hailee telling people the story of her walk, she doesn’t even mention that she saw two large (extremely venomous) black snakes on the track. She just mentions walking quickly and quietly, constantly on alert with a large stick ready in her hand. “You don’t know how creepy the rainforest is until you’re in there alone,” she says.

I watched her march out of the rainforest a couple of hours later and collapse onto the grass beside Steve, exhausted from nine kilometres of walking on very high alert, whirling around with every rustle of a falling leaf. By late afternoon I had finished my work, and we decided to have a quick mosey up the path together, just to see if we couldn’t catch sight of this allegedly aggressive cassowary.

Unlike emus, cassowaries can stand fully upright, their bodies almost perpendicular to the ground, and it was in this posture, with an affronted look in his luminous yellow eyes, that I saw him. He was waiting on the path, a black shadow hovering in the gathering gloom. We were only three or four hundred metres from the campground.

“OhmygodHaileehe’srightfuckingthere,” I breathed, pushing her back behind the tree. Ever the tourist, I pulled out my camera and poked my head around, only to find him advancing down the track towards us.

The official advice on meeting a cassowary is this: do not run. Rather, you are supposed to maintain eye contact and back away slowly. You’re also supposed to take a backpack or jacket and hold it out in front of you. The idea is that if the cassowary does kick, he gets your backpack instead of your chest. Hailee handed me her hoody and put her hand on my shoulder, guiding me as I backed along the path. I brandished the hoody in one hand and the stick in the other. The cassowary bowed low and pursued us, watching with those yellow eyes as I stumbled backward and Hailee shouted at him over my shoulder. Several times he broke into a trot and we scrambled back – for an instant I lost my cool and pushed Hailee along, half-turning to run as I babbled, “Don’t run don’t rundon’trun.”

The cassowary made no sound aside from his feet, which I watched as they padding the leaves. He stalked us, wraithlike, for several heady minutes. Finally, he charged again and veered left off the path at the last moment, leaving us to hustle back to camp feeling like we’d just escaped the Forbidden Forest at Hogwarts.

“Thank god I didn’t meet that thing on my own!” Hailee gasped.

Towns in the Daintree combine the quaint colonial architecture of Queensland with the mouldering walls and damp smells of the tropics, and the effect is actually kind of charming. Babinda was one such place, with a lovely big wooden pub in which to watch the Sunday afternoon footy, and in doing so add yet another to Hailee’s pile of quintessential Australian experiences. 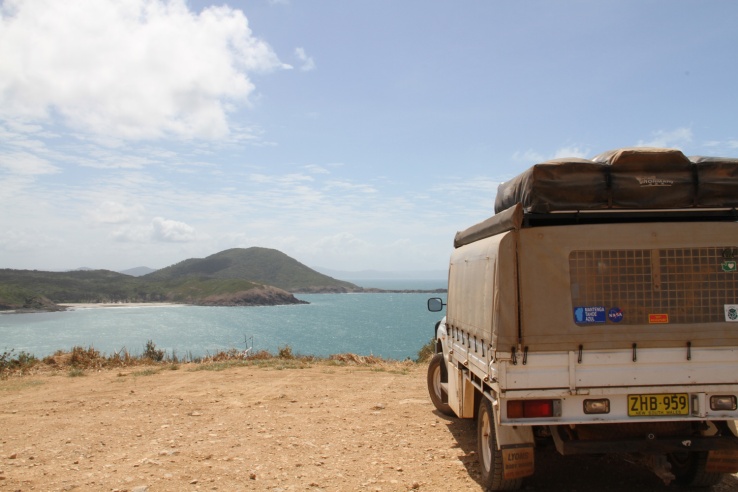 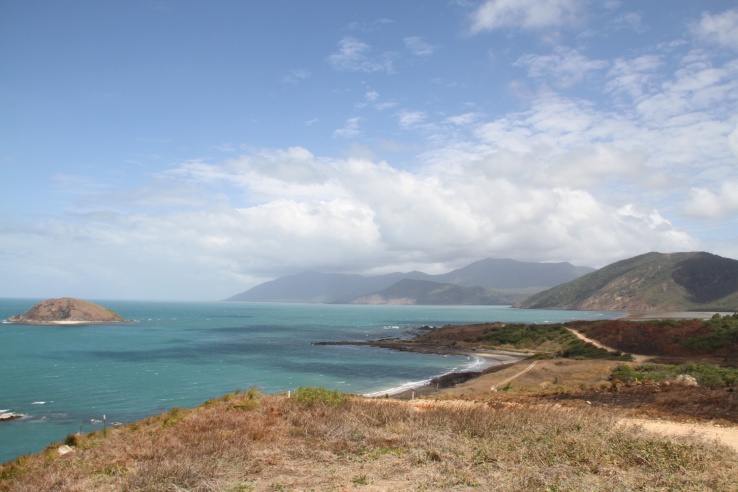 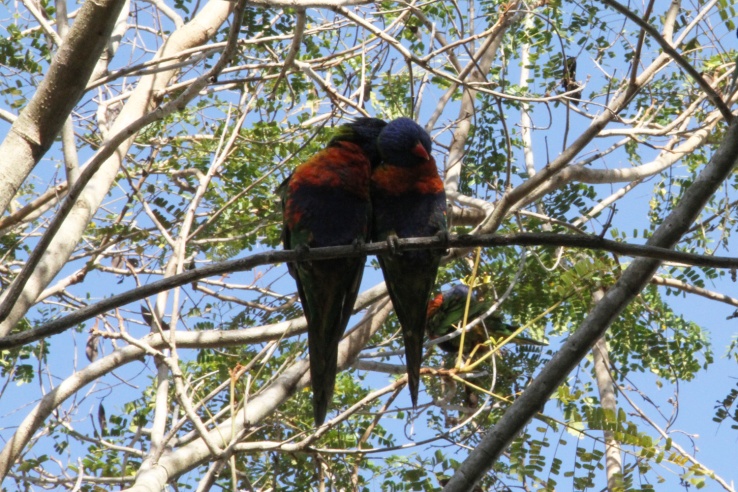 Then, south of the Paluma Range, the country began to dry out once more, and after a lovely stop with family in Townsville (thanks again Uncle Rod and Aunty Marg!) we were off on our final leg of the trip.

Next week: Fraser Island and farewell.